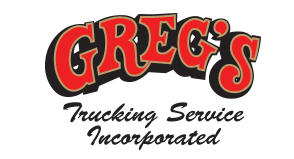 Greg Menna started Greg’s Trucking Service, Inc. in 1975.  Greg started out with an old 1966
three-axle Peterbuilt truck and a Fruehauf trailer. He then rented a yard in San Mateo
and grew his business to two trucks and brokered two pullers.

In 1985, Greg and Kathy Menna started to grow the business by purchasing two additional
trucks and added four pullers while dispatching from his own truck.  But the business grew faster than he had imagined, finally forcing Greg in 1986 to hire a driver for his truck so he could concentrate on running the business.  In 1989, Greg and Kathy purchased a two-acre yard in San Mateo with a two bay repair shop, main office and two office trailers.  In 2000, Greg and Kathy purchased a yard in Hayward. The company currently consists of 30 employees and contracts with a large variety of owner-operators, leasing company trailers.  Our fleet consists of over 100 pieces of equipment including: power units, transfers, ten-wheelers, equipment trailers, flatbeds, semi-bottom dumps, end dumps, high-side dumps and super dumps.

We have worked on many large projects over the years including the Loma Prieta Earthquake,
Oakland Hills Firestorm, Santa Cruz County Floods, Moscone Center, Bay Meadows, Highway 101 repair, Highway 880 expansion and many other jobs in the SF Bay Area and Northern California.